Three Bridges resident Khushwant Singh Pall has become the first Sikh to join the Three Bridges Volunteer Fire Company, and is one of the first Sikh firefighters in the country. He has been volunteering for the fire department for slightly over two years, but was recently sworn in by Readington Township as a fire police officer. “It is my greatest privilege and honor to serve as the first Sikh on the Three Bridges Volunteer Fire Company,” Pall said. “With our turban, people can easily see us and count on us to assist and serve them in any capacity,” he added. “The turban has long been used to identify me as a Sikh, but, in the end, it has given me much more, an identity.” 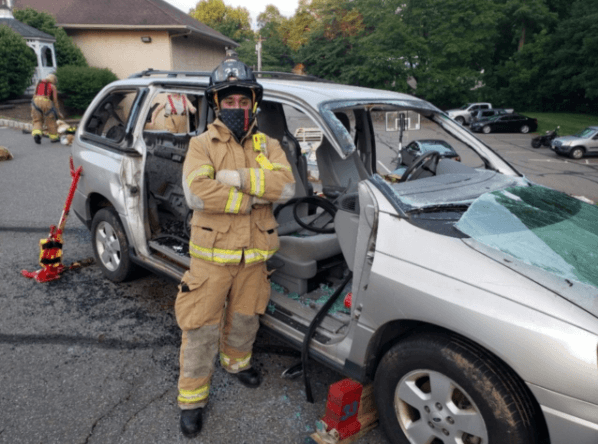 Beyond his actions as a fire police officer, Pall’s role as the very first Sikh to serve on the Three Bridges Volunteer Fire Company is significant in itself in that it reflects the inclusivity of the job and can inspire people of all backgrounds to consider becoming first responders themselves.

“It’s important for any agency with first responders to embrace (diversity), because it sends a message about what that agency is, what their initiative is, and what message they want to send to their community,” Pall said. “And the foundational, the core, of the agency is to help others. It doesn’t say to help others because you have to be this or you have to look like this; no, the message is simple and the agenda is the same.”

Pall also serves as its assistant treasurer, tanker engineer, and utilizes the jaws of life as a specialist in motor vehicle extrication. The last of these roles illustrates a second pivotal incident that compelled Pall to become a fire police officer: the death of his father, Bhupinder Singh Pall, in a motor vehicle accident when he was only four years old.

“It was a full 360,” Pall explained. “Specializing in motor vehicle extrication ignited me and fueled me even more to do everything I can at any call that I go on as if I’m responding to my own father.”

Pall said the work is purely volunteer, and his intention is always to serve others.

“This isn’t just about being the first Sikh in my department, it’s about the message we send to the community, which is that it doesn't matter who you are, where you come from, who you believe in or what you believe,” he said. “When you put on the badge, uniform or gear, we’re all the same and a part of a larger family of firefighters and first responders. We all unite to accomplish a mission and respond to the call of duty in the direst situations.”

Those interested in reading Pall’s story in his own words can find it here.