After almost three years on hiatus, Brampton’s Khalsa Cup has returned to give back to the community.

The charity ball hockey tournament, which started seven years ago, invites players from across the Greater Toronto Area to arenas in Brampton. Since its inception, it’s raised thousands of dollars for various charities.

This year, all proceeds will go to Khalsa Aid Canada, the Canadian branch of the international non-profit humanitarian organization.

“The point here is bringing the community together through sports,” said Jaskaran Sandhu, one of the tournament organizers. 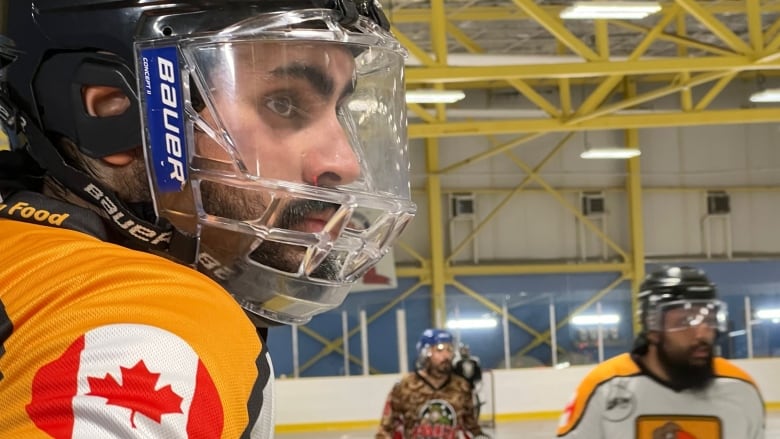 The Khalsa Cup ball hockey tournament was temporarily paused during the COVID-19 pandemic, but players are back this year with enthusiasm to give back to the community. (David Hill/CBC)

And it’s incredibly popular. The Khalsa Cup brings together 18 teams and more than 400 players over a four-day tournament held at Century Gardens Recreation Centre. The final match of the tournament will be held on Sunday.

Sandhu and fellow tournament organizer Jaspaul Singh say the event celebrates the community’s passion for hockey while promoting the Sikh principles of seva — selfless service to the community. As Brampton is home to thousands of Punjabi Sikhs who love hockey, it’s a perfect combination, they say.

"Seva is a very important aspect of giving back to the community and getting together," Singh said. "Now all our players are back, the teams are back, everyone's excited, there's a lot of passion, and we're supporting a charity. This is what it's about."

JC Gill, who plays for Jatt HC, said his return from the pandemic means a lot to him and his team. He hopes his team will win this year’s tournament, but more importantly, he sees the Khalsa Cup as a way to advance hockey in the community while giving back.

“It brings a lot of justice and inclusion to the sport of ice hockey,” he said. “It brings the community together from across GTA.”

Gurpratap Singh Toor, a volunteer for Khalsa Aid Canada, said the tournament not only generates revenue for the organization but also highlights Brampton’s athletic talent. Funds raised from the tournament will go directly back to the community, he said.