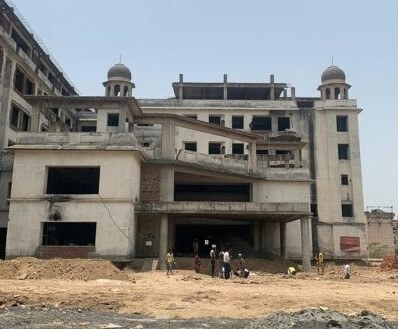 The Delhi Sikh Gurdwara Management Committee (DSGMC) is building a 125-bedded Covid-19 facility at the Gurdwara Bala Sahib, with help from devotees and foreign support. The DSGMC hopes to finish work in 60 days and launch the hospital by August. At least 200 workers, including security guards and those packaging the medical equipment, are involved in the completion of the hospital, according to ThePrint. According to Inderjit Singh Monty, co-chairman of DGSMC’s Religious Propagation Committee, devotees had last Wednesday handed over over 23 kg of gold and silver, worth Rs 2.6 crore, for the hospital. Help has also poured in from the French and Canadian governments, and even the New York Mayor Bill de Blasio’s office, for the hospital. “We have already received an oxygen plant from the French government worth Rs 1.5 crore and equipment from the New York Mayor’s office worth another Rs 2.5 crore,” DSGMC president Manjinder Singh Sirsa told ThePrint. “The Canadian government has also assured us of five oxygen generators, which we are yet to receive,” he said. Sirsa believes that the efforts he and other committees have been making to tackle the Covid-19 crisis in India have caught the attention of foreign governments. While some reached out to him via email, others directly contacted him through WhatsApp, Sirsa said. “We kept noticing the shortage of hospitals when the second wave hit us and hence we felt this was the need of the hour to have another Covid hospital, especially with a third wave ahead of us,”.