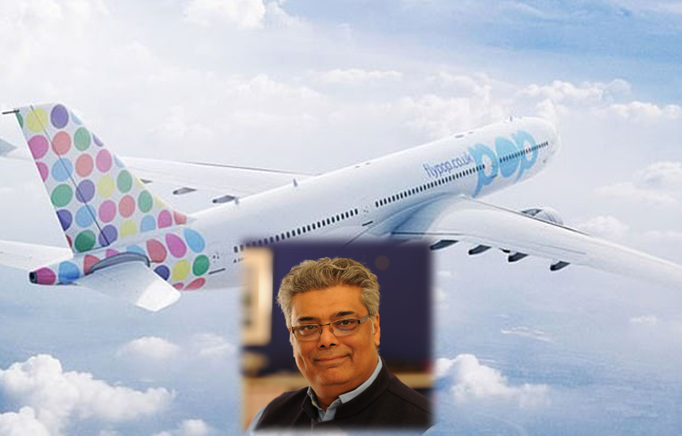 A British-Asian entrepreneur will launch a Ryanair-style airline offering cut-price flights to India as soon as July this year. Navdip Singh Judge (Nino) wants to pull off something that Michael O'Leary, founder of Ryanair, the largest European budget airline, has never done. It is something that America's Southwest Airlines, the world's largest low-cost carrier, hasn't done either. Flypop, founded by former City bond trader Nino Singh Judge, plans to operate long-haul no-frills flights at half the cost of rivals. It will initially offer two direct routes from the UK to Amritsar and Ahmedabad – with return fares from £299. Judge, or Nino as he is commonly known, is deciding whether to launch from July 1 – operating his planes under partner airlines' licences through a lease arrangement – or to start flights in October after obtaining a full Air Operator Certificate licence from the CAA aviation regulator. 'As soon as restrictions are lifted, there is an opportunity to go,' he said. 'Right now my cash burn is so minimal I can time my launch exactly when the demand is there and when I can fill my planes.' Judge founded Flypop in 2014 and has since been raising money to get to the point where he can operate flights. He has raised £7million of funding from private Punjabi and Gujarati investors, plus £5million from the Treasury's Future Fund. He added budget long-haul is 'a tough market to crack', but airlines can succeed if they take an aggressive approach to offering low fares. He said: 'If my prices are only 30 per cent lower [than competitors], I will have failed.' Judge describes himself as a 'champagne socialist' who wants to share half his wealth with those in need. 'I aspire to be as ruthless as Michael O'Leary but as benevolent as the Archbishop of Canterbury,' he said. Flypop will capitalise on the slump in business and first-class travel during the pandemic, which led to airports slashing landing fees. The cost of leasing planes has also dived, with one aircraft firm slashing monthly charges from £720,000 to £290,000. Flypop's negotiations are led by former Ryanair director Charlie Clifton, who is close to securing a deal to lease up to ten planes from either Boeing or Airbus. It will start with two and add an extra aircraft every six months. Clifton is also haggling with airports over landing fees and will launch Flypop's routes from the airport offering the best deal. Gatwick, Stansted, Birmingham and East Midlands are among the preferred options. Heathrow has been ruled out due to its steep charges. Judge hopes Flypop will hit a £100million valuation by January when he will look to raise £25million from institutions and retail investors by listing on the London Stock Exchange. It will then buy more aircraft and roll out flights to Indian cities not served by major airlines, such as Calcutta, Pune and Goa, and links to New York, Toronto, Chicago, the Caribbean and Africa. He said Flypop presents 'a huge post-Brexit opportunity', opening up direct trade routes to South-East Asia. Each of its planes will carry up to ten tons of cargo. The airline will be carbon-neutral, planting a tree for each passenger, and will match each meal bought on board with one delivered to the homeless in the UK and India.