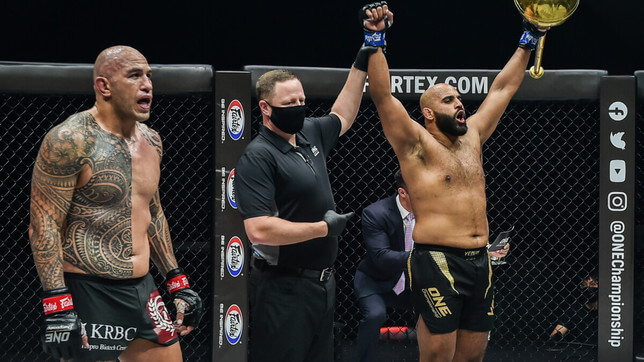 Arjan Singh Bhullar defeated Brandon Vera by technical knockout in second-round to win the ONE Heavyweight World Championship on Saturday, May 15, 2021, becoming the first fighter of Indian descent to win an MMA world title. Canada born Bhullar had his first amateur fight as a mixed martial artist back in August 2014. In a fight held at Singapore Indoor Stadium, Bhullar completely dominated in the match and finished the five-year championship stint of Vera with his vicious ground and pound. The 35-year-old, landed a solid body shot in the second round and took Vera down to the ground where he finished the fight.

Last year, it was announced that Bhullar would be challenging Vera for the ONE Heavyweight World Championship at ONE Championship: Code of Honor on May 29, 2020, but the duel was canceled due to the COVID-19 pandemic.

On May 15, 2021, Bhullar fought Brandon Vera for the ONE Heavyweight World Championship at ONE Championship: Dangal. After defeating Vera he became the first fighter of Indian descent to win an MMA world title.

After the fight, he told MMAfighting.com, “India, we got one now,” Bhullar said after the win. “Your first world champion. Let’s go.”

Bhullar dedicated the emphatic win to his coaches, who he said had “trained him well.”