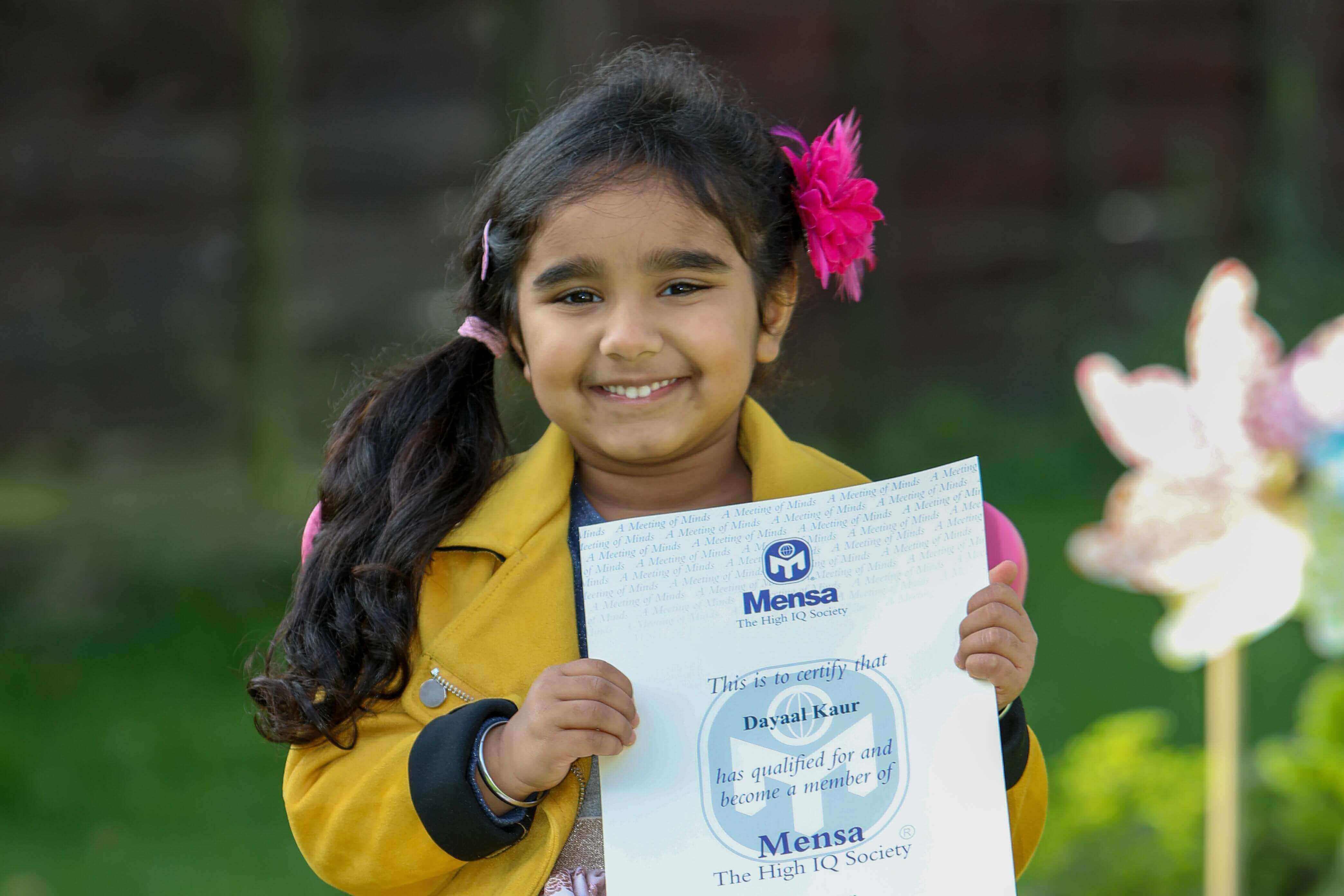 A four-year-old British Sikh girl has become one of the youngest in the UK to be accepted into the elite Mensa membership club of children with a high intelligence quotient (IQ).

Mensa is a British society whose membership rules require an I.Q. in the top 2 percent of the population.

Dayaal Kaur, who lives with her family in Birmingham, displayed exceptional learning abilities from very early on and had mastered the entire English alphabet by the time she was just 14 months old.

Kaur scored 145 in IQ which puts her in the top one per cent of the U.K.’s population in the “very gifted or highly advanced” category.

Her father, Sarbjit Singh, who was born, raised and currently teaching in Birmingham said he is very proud of her daughter.

“I am so glad we persisted because otherwise Dayaal would have been lost in the system and got frustrated when she didn’t feel like she was being challenged enough to learn new things constantly” he added.

“Dayaal is equally enthusiastic when we are reading about Sikh history and has a fascination for icons such as Banda Singh Bahadur and Guru Gobind Singh so we try and do our best to make that learning fun. She hasn’t yet been to India, but we hope to go as a family someday post-lockdown,” he said.

“There is a big debate to be had about how we cultivate our youth and provide the right kind of support and education so that we don’t lose future inventors and high achievers,” he said.

Kaur expressed an enthusiasm to appear for the Mensa test, conducted online from home due to the Covid-19 restrictions, and achieved an IQ score of 145, which puts her in the top one per cent of the UK’s population in the “very gifted or highly advanced” category.

“Her family can make use of the supportive parents’ network that has developed and we hope that as she grows up, Dayaal makes many lifelong friends and experiences some of the many learning and network opportunities that Mensa offers,” he added.

The journey to this recognition has not been an easy one for the family as they struggled to convince local experts that Dayaal needed access to the gifted intelligence programme within the education system.

"We are happy to welcome Dayal to Mensa where she joins a community of around 2000 juniors and teen members," said John Stevens, CEO of British Mensa.

Her parents explained what the online process would involve and she readily agreed in her usual spirit of “coming alive” in any kind of learning scenario.

In her assessment, expert Lyn Kendall recommended that Dayaal’s “ability and maturity” meant that it would be worth considering accelerating her beyond her peer group in a classroom setting.

Dayaal, whose dream for now is to become an astronaut and also to have a stable full of horses, took the test just before her fourth birthday in October last year.