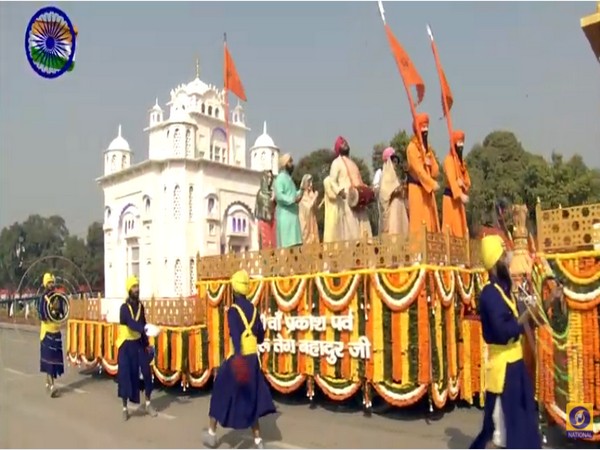 January 26: At this year's Republic Day Parade on Tuesday, the tableau from Punjab showcased the glory of the ninth Sikh Guru Sri Guru Tegh Bahadur, who sacrificed his life for humanity. The tableau presented a divine and serene aura marking the '400th Birth Anniversary of Sri Guru Tegh Bahadur'. The beginning of the trailer displayed the 'Prabhat Pheri' with people reciting Kirtan, while the end of the trailer showed Gurdwara Sri Rakab Ganj Sahib, the site of the cremation of Guru Tegh Bahadur, after his martyrdom in November 1675. Guru Tegh Bahadur, was born on April 1, 1621 in Amritsar. The name Tegh Bahadur (Mighty of the Sword), was given by his father Guru Sri Hargobind Sahib Ji, after seeing his valour in battle against the Mughals. Guru Tegh Bahadur prominently known as 'Hind-Di-Chadar' was not just a principled and fearless warrior, but also a learned spiritual scholar and poet whose 115 hymns are included in Sri Guru Granth Sahib. He travelled extensively in different parts of India and preached Guru Nanak Dev's eternal message of love, peace, equality and brotherhood to uphold the value of rightness, truth and freedom of faith.

The end of the trailer shows Gurdwara Sri Rakab Ganj Sahib, the site of cremation of Guru Tegh Bahadur.#RepublicDay pic.twitter.com/LAY7WkeKHF