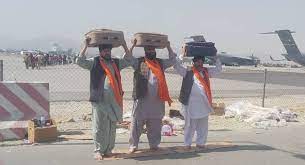 Around 60 Sikh & Hindus were stopped by Taliban led government in Afganistan from carrying Shri Guru Granth Sahib Ji while their departure for India on Sept. 11. Afgan Sikhs were scheduled for departure to India to pay obeisance at the Harmandir Sahib Gurudwara, Amritsar but were stopped by authorities from carrying the Holy Book with them as the ministry of culture in Afghanistan considers these to be part of their country’s heritage.

Meanwhile SGPC chief says that this is another form of callousness on Sikh minorities which eventually led them to leave the country. It is noted that Afghan Sikhs started fleeing from their home country in 1990s and it is estimated that now there are fewer than 100 left including this last big group of 60 who are unwilling to leave their country without the Guru Granth Sahib.

This incidence drew ire of Sikh community all over the world. SGPC President Harjinder Singh Dhami on Wednesday strongly condemned it citing this decision of Taliban government as direct interference in the religious affairs of Sikhs.