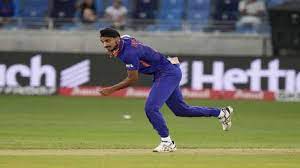 Sports has no religion but of late fiasco over the drop of catch in India-Pakistan cricket match ensued the ire among few self proclaimed patriots and also let the Pakistan jumps on the bandwagon ,who are now labeling Arshdeep as ‘Khalistani’.

It is fathomable though when it comes to Ind-Pak showdown, emotions are always high. But this ‘drop of catch’ by 23 years old Indian cricketer gives the opportunity to Pakistani & their Indian associates aligned with them to tarnish the image & spread muddy waters over internet by labeling him as ‘Khalistani’. Pakistan never misses any chance to fiddle the image and this is blatant through this fact that many twitter accounts from Pakistan. As soon as he dropped the catch twitter accounts were deluged with cuss messages backed by Pakistani. The plan was very well staged to create communal acrimony between Hindu & Sikhs.

Wikipedia page entry was soon changed to reflect a Khalistan association. Indian govt. summoned executives of Wikipedia which wrongfully mentioned him as Khalistani & linked him to a Sikh separatist movement. Wikipedia's articles, written primarily by unpaid volunteers, are relied on by platforms from Google to Amazon Alexa to give their users information and context. Taking strong note of the matter, Ministry of Information Technology on Monday summoned Wikipedia executives in India to explain the origins of the alteration of Wikipedia account of Arshdeep Singh.

Use of such remarks are though no surprises as several such events have taken place in past three years. Arshdeep Singh, due to his community, became the pawn of a bigger conspiracy. This conspiracy was hatched by Pakistan's intelligence agency ISI, which left no stone unturned to paint Singh as a Khalistani agent. While Pakistan tried to make it look like India’s reaction to defeat it was in fact a big ISI conspiracy which was prepared long back.

The modus operandi used in Arshdeep case reminded of the Mohd Shami episode in October 2021.