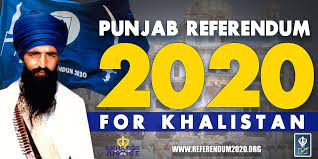 Voting for Khalistan referendum is on Coming 18th of September at Toronto, Canada. Sikhs performed special prayer in Toronto on 13th Sept. to support Khalistan Referendum to support the voting. The Ardas mass prayer was offered at Sri Guru Granth Sahib Parkash Purab, Malton, Canada. Khalistan Referendum campaign — in which Sikhs are asked to answer the question “Should Indian governed Punjab be an independent country?

Earlier, US watchers too said that this is not confirmed ,the people who joined the prayers & previous voting process are really Sikhs or not. Many of them may be Afghans or Pakistanis. It was evident in the Coverage of the event that the same set of people were brought in to vote repeatedly.

It is notably seen that this movement is supported by ‘handful of Sikhs’ which are being backed by neighbouring country on foul intentions of division of country & creating acrimony between Hindu-Sikh brothers. False rumours & news were incessantly being spread by these disgruntled Pro- Khalistan organization. Earlier votings in various countries proved to be as damp squib & not many people were seen supporting it. The pro-Khalistan elements believed to have reached out to illegal Sikh immigrants and offered them immigration support and money to participate in the referendum,

Recent reports claim that Sikhs are happy & at peace in India & not supporting this Khalistan movement but facing major issues in Pakistan & other countries like forced conversion & hurting their tenets invariably where they are in minorities. The organisers, including their backers in Pakistan, went on an overdrive to declare that the exercise was a success by faking number of supporters.

Referendum movement was started by SFJ (Sikh for Justice) which was declared unofficial referendum on Khalistan by Indian govt. and declared SFJ, as an illegal organisation under the controversial Unlawful Activities Prevention Act (UAPA) of India in 2019.