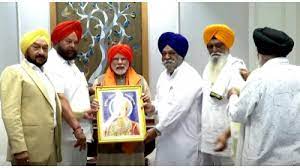 A delegation of Gurudwara Shri Bala Sahib,New Delhi,India on Monday visited Indian Prime Minister Narendra Modi at his residence to offer ‘prasad’ and blessing after it organised an ‘akhand paath’ from September 15 to 17 to mark his birthday on September 17. The Gurudwara members organised langar, health and blood donation camps during its “first of its kind initiative”. The statement said India’s PM expressed his ecstasy on meeting the delegation and thanked them. He said that he was humbled and deeply touched by their gesture for making him feel a part of the Sikh Community.

Gurudwara Committee reiterated the commitment of the government to continuous work for the welfare of the Sikh community.

During the meeting, the delegation also thanked the Prime Minister, including declaring 26 December as “Veer Baal Divas”, reopening the Kartarpur Sahib Corridor, removal of GST on langars run by gurdwaras and ensuring that the copies of Guru Granth Sahib reached India from Afghanistan.

It is noted that on Sept 18th, in an effort to strengthen their demand for a separate Khalistan, some Sikhs in Canada voted for a Khalistan referendum at the polling station at the Gore Meadows Community Centre in Brampton, Canada. A high-profile campaign for Khalistan is being run by the pro-Khalistani and pro-separatist group Sikhs for Justice (SFJ). It is seen that although the Sikhs in India show their indifference in this but it is only supported by Sikhs diaspora.