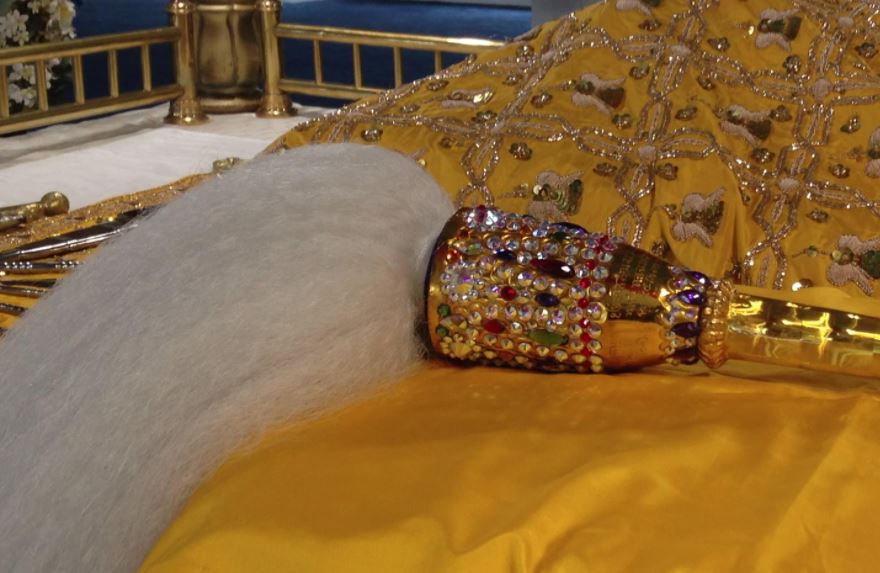 If we trace etymology of the word “Chaur”, we would find that the word is rooted in old Punjabi. It usually refers to the tuft at the end of a lion’s or yak’s tail, and how they use it to whisk away flies, to fan, brush or to simply wave it overhead.

The word, therefore, has a dual nature. It refers as much to the act of whisking or waving as it does to the tufted tails of these mighty creatures. It is not far-fetched to imagine how it came to be associated with Chaur Sahib, considering the similar nature of the task.

What is Chaur Sahib?

It is an implement, a ceremonial whisk, found next to the Palki or Manji Sahib on which Sri Guru Granth Sahib is placed. It is used to fan Guru Granth Sahib, as they used to do for kings of the olden days. It is a sign of respect and reverence towards the Eleventh Guru and towards the collective works of all Sikh Gurus and many holy saints. It highlights the importance of scripture and attests to the fact that it is the mightiest authority in Sikhism.

Construction-wise, it is usually made of yak hair, carefully tied at the end within a metal or wooden handle, often decorated with intricate designs. At any given time, Chaur Sahib is required to be placed in the immediate vicinity of the Guru. A volunteer (sevadaar) wields the Chaur Sahib and reverently waves it above Sri Guru Granth Sahib.

Anyone, a man, woman or child is allowed to perform the seva while Guru Granth Sahib Ji is open or being read from.

Since time immemorial, a Chaur whisk has been in use to fan royalty. It evolved into a custom and became a symbol of authority and respect. During the Mughal era, a whisk could also indicate the rank of someone with the royal hierarchy.

Within Sikhism, the practice was incorporated and Chaur was used in a similar way as the  Mughals did, that is the sevadaars fanned the ten Gurus to keep insects or other flies away from them. The practice continued thereafter.

Also, Punjab had an age-old tradition where younger members of the family would wave fan to generate a light comforting breeze for their elders during the extreme heat of the summer. During these initial stages, the fans were usually made of peacock feathers or a canvas of sorts.

What Does the Gurbani Say About Chaur Sahib?

There are multiple instances where the long tradition of waving the whisk is mentioned in Gurbani. Although the words used to describe the act of brushing, fly, fan or whisk are different, they all point to the same practice.

Some of prominent examples are—

Translation: “Why should I offer to Thee, that which Thou Thyself has created? Thy Name is the fly whisk fan, which I wave over Thee." (p.694)

Translation: “There are assorted enjoyments of pleasures, powers, beauty, canopies, and fly whisk fans waving overhead, and thrones to sit upon." (p.707)

Why the Practice Continues Today?

‘Seva’ is one of the foundational principles of Sikhism and wielding Chaur Sahib is considered as a service of the highest order. Many, while performing this service, also silently recite Gurbani. Today, with the advent of air-conditioning and the electric fans, the practice is obsolete in the traditional sense, but rather it is the element of seva that has taken precedence. As Guru Granth Sahib is regarded as the “living Guru”, it is necessary for Sikhs to accord the scripture the same reverence and respect that they used to accord to the ten Gurus, and thus, the practice continues today.