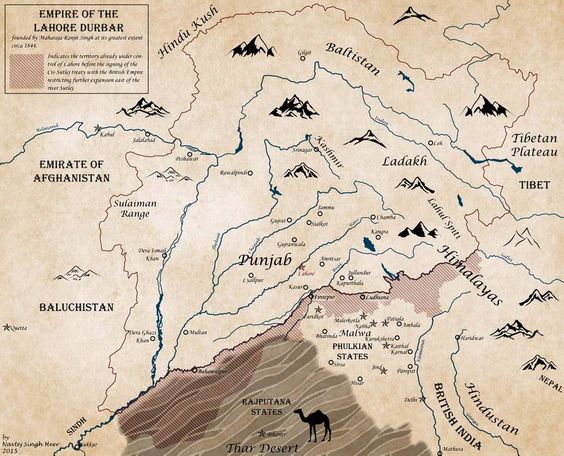 The Indian Subcontinent is a vast piece of land, surrounded by seas on three sides of the peninsula, mountains in the north, and Thar desert in the west. In the past, the only direct entryway to the subcontinent was through the mountain passes in the North-West. The passes opened into the alluvial plains laid down by multiple rivers.

In Rigveda, one of the world’s oldest manuscripts, the area was famously called Sapta Sindhu— the land of seven rivers. The rivers were a lifeline of Punjab, and remain so today. They were called sacred in the Vedic texts, each with a mythology attached. Here are some interesting facts concerning Punjab and its culture—

Mahabharata Vividly Describes The Land That Came To Be Known As Punjab:

The region of Punjab in Mahabharata was traversed by Madra Kingdom. It was not a land of five rivers as it later came to be known as. During that era, the topography was different and over time, rivers shifted their course. In Mahabharata, the second wife of Kuru King Pandu belonged to Madra region and she gave birth to two Pandava twins called Nakula and Sahadeva. It is also believed that the kingdom was in fact divided into three units: eastern, western and northern— all with their own respective capitals.

Climate and culture described for the Madra kingdom is different from the kingdoms on the Gangetic plains. Madra was described as a relatively cold region where people used blankets. Its culture is distinct from Vedic culture of the Gangetic plains. The people of the region were considered “outsiders” belonging to a tribe called Bharatvarsha. They reared sheep for milk, and bred horses. They were excellent horsemen and were even familiar with camels.

Panchanada is another name mentioned for the Punjab region in the Puranas. It was a member of the vast Indus Valley Civilization that even extended to the seas near present-day Gujarat.

Punjab Was the First Home of Vedic Sanskrit In Indian Subcontinent:

As Vedic culture spread across Punjab, so did Sanskrit. It became one of the first languages in the region with a fully-developed vocabulary and grammar. Although it should be noted that it was not the language of common people. It was limited to religious elites.

Nonetheless, it influenced and became the base for all other languages that developed over time in the region, Punjabi being one of them. Common tongue in the region was Paisachi Prakrit. Gradually, as people from Persia and other regions settled in the area, the language was influenced by Greek, Portuguese, English, Persian and Arabic as well. Many words are still similar in these languages.

The protagonists and antagonists in Ramayana take a metaphorical context in Guru Granth Sahib. Ravana is equated with ego that we humans fall prey to, while Sita is considered a metaphor for intellect (buddhi). There is also the mention of Dashavatara— the great ten kings who toiled to bring peace and order into the world.

Translation: “By his divine will (order), the ten reincarnations were created.”

In Dasam Granth, the work generally associated with Guru Gobind Singh Ji, ‘Ram Avatar’ is considered as one of the 24 incarnations of Vishnu. However, it should be noted that the text makes a clear distinction between the all-powerful almighty and the ‘avatars’. While God is beyond the ravages of time, change and death, the avatars were subjected to all of them. Eventually, they perished to the machinations of ‘kaal’ i.e. death.

Historians say that the mention of Rama in Guru Granth Sahib is not pointing to Lord Rama of Ayodhya but instead, it is a reference to the Almighty in general.

Satluj Is Older Than the Himalayas: Satluj, also known as Shatadru, is one the five rivers traversing the alluvial plains of Punjab. An easternmost tributary of Indus, it irrigates a vast area of land. It is also home to the Bakhra Dam, one of the first projects to be taken up by independent India. The general perception is that the river flows from the Himalayas and like all other major rivers, it is created and fed by the melting glaciers and drainage from the mountains. But that is not the case. Geologically speaking, it is an antecedent river. While the tectonic plates converged and the Himalayas rose, Satluj began to cut through the uplifted rocks. About five million years ago, it was thought to drain in the Ganaga but gradually, it changed the course. Punjab saw intermittent wars and conflict throughout its history, spurred by its unique geographical region. But the people of Punjab always persevered. They protected their land with a great zeal, and enriched their culture and language as they absorbed migrants into their ranks. Post-independence, Punjab shared in the success of the Green Revolution, effectively making it the breadbasket for the whole of India and the world.