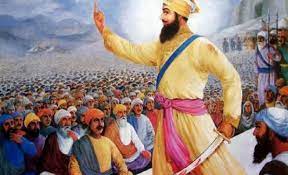 Guru Gobind Singh ji, the 10th guru of Sikhs, created the ‘Khalsa’ in March 1699 to inspire the Sikh community in the face of oppression and persecution during the Mughal times in India. The word "Khalsa" means "pure". Inductees of the Khalsa were expected to have the courage, will and the strength to fight oppression (symbolized by the sword). These values are still esteemed by Sikhs today. He gave the Khalsa a distinctive external form to remind them of their commitment, and to help them maintain an elevated state of consciousness. In contemporary Sikhism, worship services hold at Gurdwaras (Sikh temples) throughout the world regularly repeat the phrase, "Waheguru ji ka Khalsa, Waheguru ji ki Fateh”.

An initiation ceremony (Amrit sanskar, nectar ceremony) and rules of conduct for the Khalsa warriors was formulated by Guru Gobind Singh ji. It created a new institution for the temporal leadership of the Sikhs, replacing the earlier Masand system. Additionally, the Khalsa provided a political and religious vision for the Sikh community.

The first five members of the Khalsa, called the “Panj Piaras”, the “beloved five,” were publicly initiated. They drank from a common bowl the nectar called amrit, prepared and consecrated by stirring sugar crystals into water with a double-edged sword and reciting the words of Guru Nanak’s hymn, the Japji, and some hymns of the other gurus. Then Guru Gobind Singh received many others into the new order of the Khalsa. He instructed them to wear the five distinct symbols of the Khalsa at all times: the kirpan, a small sword; the karha, an iron or steel bracelet; the kachha, a military form of undershorts; the kangha, a wooden comb worn in the hair, and the kesh, uncut hair, covered with a turban. The new initiates were given new names, Singh (“lion”) for men, and Kaur (“princess”) for women. This was a new birth. The khalsas were to consider themselves born in Anandpur, as sons and daughters of Guru Gobind Singh and his wife Sahib Kaur.