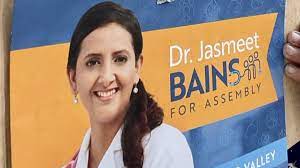 Jasmeet Kaur Bains, a family physician from Bakersfield, made history by becoming the first Indian-origin Sikh woman to be elected to the California Assembly. Democrat Jasmeet Kaur Bains became the first woman of Indian and South Asian descent to be elected to the California Assembly. She is the daughter of a Sikh immigrant. After a tightly fought election, she was elected the winner of District 35. Leticia Perez, a Democrat running for Kern County Supervisor, gave her a tough primary fight and received 13,982 votes, but Bains defeated her with 13,721 votes.

Bains is a medical director at Bakersfield Recovery Services, a non-profit that treats adults suffering from addiction. She received the 2019 Hero of Family Medicine Award from the California Academy of Family Physicians as well as the 2021 Beautiful Bakersfield Award from the Greater Bakersfield Chamber of Commerce. In her campaign pitch, she said she would prioritise healthcare, homelessness, water infrastructure and air quality. The Sikh and American Indian communities generously contributed to her over $500,000 in fundraising efforts. Many Punjabi women participated in her campaign. The aim of Bains’ campaign was to expand access to high-quality healthcare and assist small companies in recovering from the COVID-19 pandemic.

Bains and her family relocated to Delano, California, in 1989. In 1979, her father emigrated from Punjab, India, where he owned a Chrysler car dealership. She asserted that even as a young child, she had witnessed her father’s ascent from being a mechanic to being the successful owner of his own auto dealership, where she now collaborates with him in a managerial role. She said that I want to be the physician that I always dreamed of being, I need to make sure that we have the correct legislation in place”.