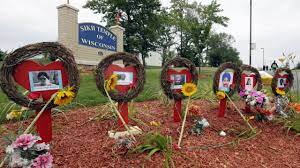 Ten years ago, on August 5, 2012, a gunman walked in and opened fired inside the holy grounds of a gurdwara in Oak Creek, Wisconsin in the United States. He fatally shot six people and injured four others. Years later, a victim continued to suffer from those wounds and died in 2020. The incident shook the local Sikh community and still reverberates in their hearts to this day.

How The Shooting Unfolded?

It was a Sunday like any other, and as always, busier than the weekdays. The pathis had gathered in the central lobby and the congregants were arriving. The langar preparation was in full-swing. The community had made something akin to a home far from home back in India, and the sprawling Gurdwara premises is a testament of that. The community, like Sikhs everywhere, is hard-working and peaceful. But there was no rationality behind the hatred that the gunman was carrying.

He walked in and opening fire, killing five men and 1 woman. All the men were wearing turbans. The officers quickly arrived to the scene and the gunman was shot. It was later revealed that although he was shot by the police but he died from a self-inflicted wound to the head. The local police had described the incident as “terrorism-like”. It is essential to recognize that the gunman was driven was white supremacist ideology— a demeaning and hateful belief that Caucasians are superior than others.

The goal of the perpetrator was clear— to instil fear in the hearts of people. But the incident only brought together the Sikh Community more strongly than ever. One of the officers was seriously injured in trying to aid a victim. He was awarded $10,000 by a Sikh organisation and another $100,000 by two other members of the faith.

At the time, the shooting was widely condemned and drew a sharp reaction from India. Both the Indian Prime Minister Dr. Manmohan Singh and the American President Barack Obama expressed grief. At many places, candlelight vigils were held in solidarity.

This month, Wisconsin lawmakers introduced a resolution in the state house to commemorate the the 10th anniversary of the shooting. A part of the resolution states, "Freedom of religion is protected in the Constitution, and no religious institution should be subject to violence, hate, intolerance, or religious and racial discrimination”.