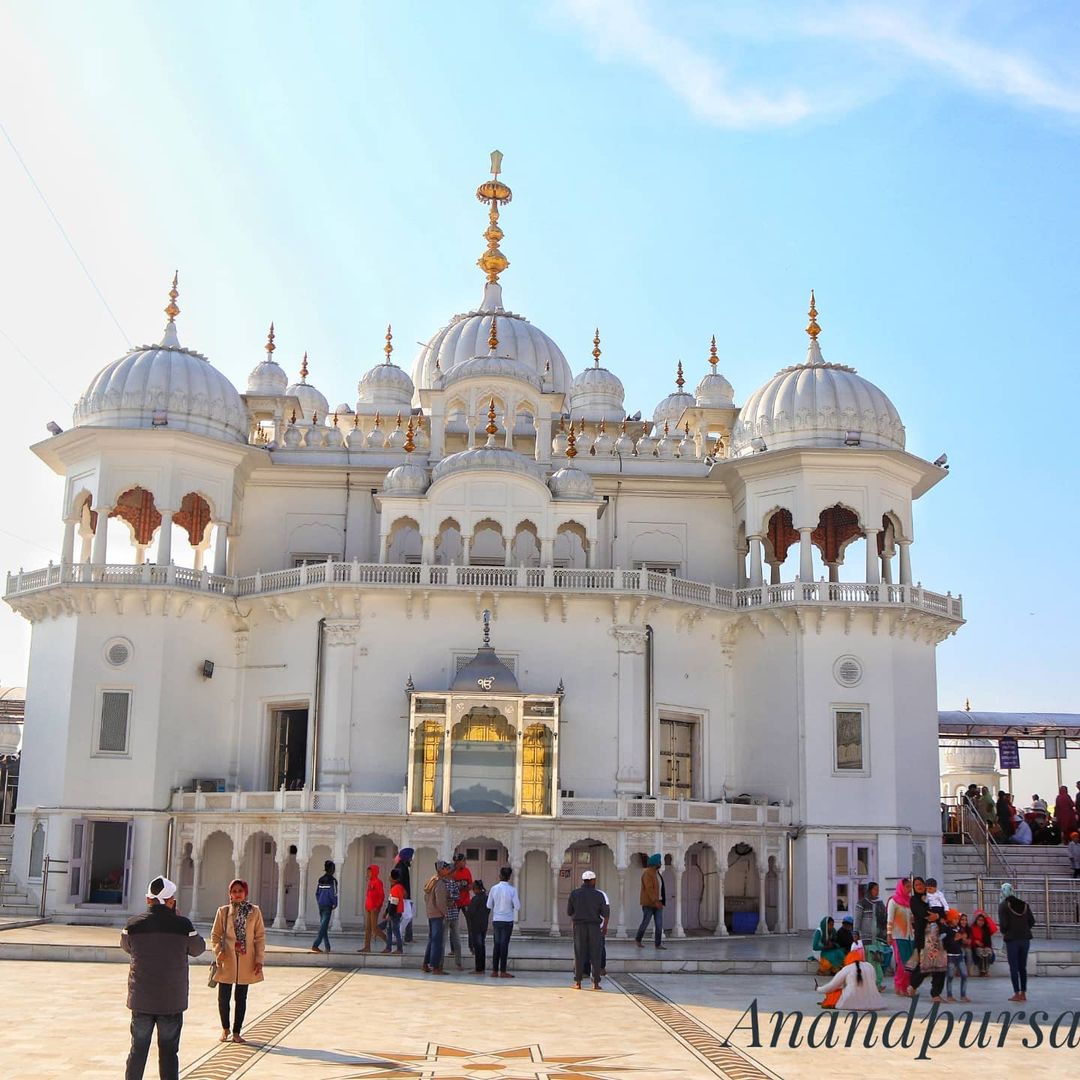 Located in Anandpur Sahib, Takht Sri Keshgarh Sahib is one of the most important sacred places of the Sikhs. It marks the birthplace of Khalsa and one of the five religious authorities (Five Takhts) of Sikhism. It is rich in history and its centrality in Sikhism can be gauged from the fact that it is one of the five Takhts (Seats of Authority) in Sikhism.

Sri Keshgarh Sahib has the distinction of being the place where Guru Sahib founded the Khalsa Panth. It is here where the first initiation, also called Khande Di Pahul, occurred. The hill we see today is much inundated. Historically, the hill was about ten to fifteen feet higher than its present-day height.

It is agreed that there was another hill alongside it where a tent was set up on the day of foundation of Khalsa. The area was much wider then, as it accommodated thousands of Sikhs that attended the ceremony on that auspicious day. Sadly, much has changed with time. Due to construction of a direct road between Anandpur Sahib and Keshgarh Sahib, many hilltops had to be leveled.

Kesgarh Sahib was originally built as a strong fort in 1699 in close proximity to Anandgarh fort. The hill armies were not able to breach the defenses of a well fortified Anandpur Sahib and could not reach Kesgarh Sahib. Guru Guru Gobind Singh made five forts on the border of the city. 1. Qila Anandgarh Sahib: This was the main fort, after which the city was also named Anandpur Sahib. The Army once resided here. 2. Qila Holgarh Sahib: Here Holla Mohalla was celebrated. 3. Qila Lohgarh Sahib: Here the weapons for the Army were made. 4. Qila Fatehgarh Sahib: Fateh Singh was born here hence the name. 5. Qila Taragarh Sahib: This fort was made to stop the hill armies.

Only in December 1705, when Guru Sahib decided to leave the town, the hill armies managed to enter the fort and demolish it. This was a hard time for Sikhs. They were subjected to a wave of persecution. They could not even enter the region of Anandpur until Banda Singh Bahadur vanquished the King of Bilaspur.

After the fall of Banda, Sikhs again had to endure much oppression. But it did not last.

The Era of Sikh Misls:

The Sikhs again rose to power with the establishment of Sikh Confederacy. The twelve Sikh Misls became the de facto rulers of Punjab. With this, travel to Anandpur was re-established, so much so that it became common. Baba Baghel Singh, belonging to Karorasinghia Misl, constructed many shrines in Delhi; and then turned his eyes towards Anandpur. Many historical buildings there were in a dilapidated state. Baba Baghel took it upon himself to restore them to  their former glory. Many new shrines were built as well. In 1812, the King of Bilaspur again tried to occupy Anandpur. But he failed and suffered heavy losses.

Keshgarh Under the Reign of Maharaja Ranjit Singh:

Maharaja Ranjit Singh united the disparate misls and formed a unified Punjab. It was an era of peace and prosperity. Keshgarh Sahib, along with Anandpur, became a prominent

pilgrimage. The administration of the Gurudwara was regularised where successive Granthis, such as Bhai Budh Singh, Bhai Karam Singh, Bhau Amar Singh and others, were put in charge of the shrine. It is interesting to note that up until the Gurdwara Reform Movement in 1920s, there was only a singular position of Granthi, but then a position of Jathedar was created as well.

The present-day building was constructed under the keen supervision of Sant Hari Singh Kaharpuri between 1936 to 1944. As mentioned before, the area lies on the hill. For stability of the structure on the slope, retaining walls had to be built on the sides.

On the lower hills surrounding Keshgarh Sahib is the residential complex for the staff, aptly called Dashmesh Niwas. In the 1980s, a huge hall was also built where congregations could gather on occasions such as Baisakhi or Gurpurab. A Sarovar (Holi water pool) is also located at par with the main building in the walled compound.

The main building stands on an uplifted platform rising above the surrounding courtyard. The shrine preserves many sacred relics from the era of Guru Sahib. They are displayed on a platform for the visitors. They include a dagger (katar), a double-edged sword called ‘saif’, a khanda, a spear (kirpan barchha), a muzzle-loading musket, and another spear with a twisted blade (called ‘nagini’). There is another set of weapons on display here which were taken by the British during their occupation of Punjab. They were brought back in 1966, the 300th Anniversary of Guru Gobind Singh Ji.