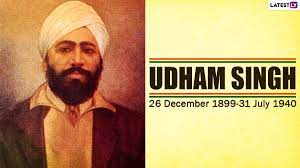 Udham Singh, born on December 26th, 1899, was an Indian Nationalist and revolutionary. He

philosophy that influenced Bhagat Singh. He believed in a united India without religious

animosity, and at one time, he went by the name of Ram Mohammed Singh Azad, a name

He was born in a family that belonged to Jammu clan of Kamboj lineage, though at the time

of his birth, the family was settled in Sangrur district of Punjab. His family-given name was

Sher Singh. His father, Sardar Tehal Singh, was a watchman at a nearby railway crossing in the

adjacent village. Udham lost his mother when he was only 2 years old, and lost his father too

just six years later. Udham was then left with his brother, Mukta Singh. With the help of Bhai

Krishan Singh, they were both admitted to Central Khalsa Orphanage Putlighar, Amritsar.

At the orphanage, both brothers were initiated into Sikhism and were given new names. Sher

child who has already lost much of his family, the death of his brother Sadhu in 1917 came as

a great shock. But despite the challenges the life threw at him, he persevered. Whist at the

orphanage, he received an education and passed his Matriculation. In the year 1919, he left

the orphanage to start a new life.

men, women or children. Many were there to peacefully protest against British colonial rule

and to object to the arrest and deportation of Dr. Satyapal and Dr. Saifuddin Kitchlew among

others who were incarcerated under the draconian Rowlatt Act. It is believed that Udham was

there with his friends and he was serving water to the crowd. By some estimates, more than

The event had a deep impact on Udham. As a consequence, he dived deep into active politics,

emerging as a dedicated revolutionary. In 1924, he went to the US and became involved with

the fighters of the Ghadar party under the patronage of Lala Hardyal. He organised overseas

Indians to actively participate in the freedom struggle. He returned to India three years later

in July 1927. In the same year, he was arrested in Amritsar for the possession of unlicensed

his possession. In the court hearing, he was unapologetic for his desire to oust British from

India, and was sentenced to five years of rigorous imprisonment.

He stayed in the jail for four years and missed some major events of Indian Freedom Struggle.

Soon after his release, he began to formulate a plan to reach London and kill Michael

O’Dwyer, who was governor of Punjab at the time of Jallianwala Massacre. For his

revolutionary activities, he was under constant surveillance by the Punjab Police. Little

concrete is known about his travel from India to London. Along the way, he passed through

and stayed in many countries such as Germany, Italy, Austria, France and Switzerland. He

purchased a revolved and ammunition. He then waited for the right opportunity so that the

killing can have the maximum impact.

Finally, on 13th March, 1940, twenty-one years after the Jallianwala tragedy, an opportunity

presented itself. Michael O’Dwyer was named as one of the speakers in a joint meeting of

East India Association and Royal Central Asian Society. The meeting was due to be held at

Caxton Hall. He concealed his revolver in a book, which was cut specifically to hide the

revolver within its pages. At the end of the meeting, he took out his revolver and shot O’Dwyer

twice, killing him immediately. He also fired on Secretary of State for India, Lord Zetland, but

he wasn’t seriously injured. Udham had no intention of escaping and he was arrested on the

hanged at Pentonville prison and was buried later at the prison grounds. His remains were

repatriated by the Indian government and exhumed in July 1974.

At the time, the reaction in the Indian press to the assassination was mixed. Many condemned

the killing as senseless, but many more praised the act as heroic. Today, we have to remember

the trauma that young Udham must have felt at the senseless murder of his countrymen.

Despite obstacles at every step, he went onto avenge their deaths and thus, we have rightly