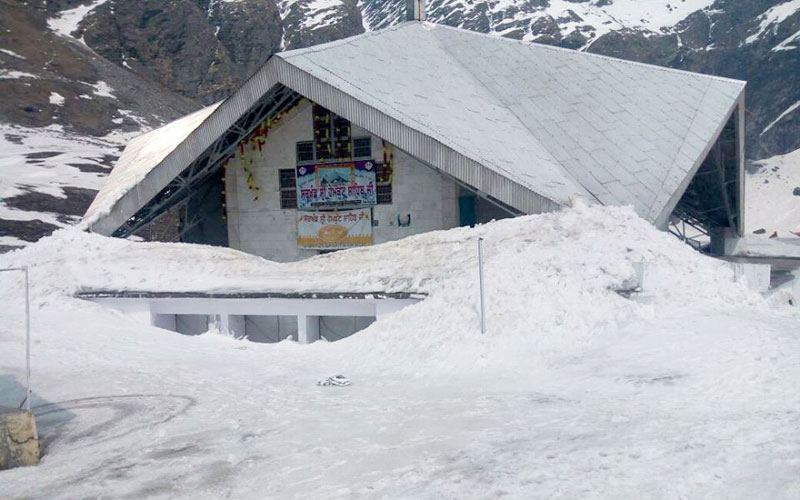 As pilgrimage to Hemkund Sahib opens next month, let us take a moment to look at the history of the holy site and the story behind it that very few of us know.

Hidden among the snowy Himalayan peaks is the Lokpal lake, the literal translation of which is ‘protector of the world’. It is located in the state of Uttarakhand in North India and lies about 13, 650 feet from the sea-level. The glacial lake sits in the middle of seven mountain peaks, and there stands a Nishaan Sahib on each of them. Its unique location renders it inaccessible for about half of the year as snow blocks all pathways. It is believed that this was the place where a previous incarnation of Guru Gobind Singh Ji spent years in trance of the Almighty. Alternatively, it is also described as a ‘Tap Asthan’ (place of meditation and prayer) of Guru Gobind in another lifetime and it was here that he attained his union with God.

What Does Dasham Granth Say About Hemkunt?

Dasham Granth is the second holiest scripture in Sikhism. It consists of writings of Guru Gobind Singh Ji. The compositions aim towards furthering the ideas enshrined in Sri Guru Granth Sahib. It also includes Amrit Saviye, Jaap Sahib, and Benti Chaupayi. These banis form part of Nitnem (the daily prayer of Sikhs). For reference to Hemkunt, we have to read Bachitra Natak (Translation: Resplendent Drama). It is beautiful piece of composition and acts as a brief memoir or auto-biography of Guru Sahib. In it, he says—

Translation: “Now I relate my own story as to how I was brought here. While I was absorbed in deep meditation. The site was the mountain named Hemkunt, with seven peaks and looks there very impressive. That mountain is called Sapt Shring (seven-peaked mountain), where the Pandavas Practiced Yoga. There I was absorbed in deep meditation on the Primal Power, the Supreme Being.” “In this way, my meditation reached its zenith and I became One with the Omnipotent Lord. My parents also meditated for the union with the Incomprehensible Lord and performed many types of disciplines for union. The service that they rendered the Incomprehensible Lord, caused the pleasure of the Supreme Guru (i.e. Lord). When the Lord ordered me, I was born in this Iron age. I had no desire to come, because I was totally absorbed in devotion for the Holy feet of the Lord. But the Lord made me understand His Will and sent me in this world with the following words.”

The Story Behind Hemkunt’s Discovery—

Many Sikh scholars debated about the place described in Bachitra Natak, but they could not agree on its probable location. The first scholar from the Sikh community to trace its location was Pandit Tara Singh Narotam in the year 1884. Decades later, a book called “Sri Kalgidhar Chamatkar’ was published by Bhai Vir Singh and it contained the findings of Tara Singh.

But the book was not prominent enough for this theory to gain traction, but it did find one reader which took extensive interest in finding this place. It was a Granthi retired from the Indian Army—Sant Sohan Singh. He was determined to locate the spot, but for about a year, he had no luck. He then heard folktales about a local place called Lokpal.

Even before the site was known to Sikhs, he found that there were stories about Lokpal. It was believed to be the place where Lakshman had meditated as well. It is also said to be the place where the herbs that combined to form Sanjeevani Buti were found. When Bhai Sohan Singh visited the place, he found much resemblance between descriptions in the Granth and this place. He was convinced that he had found Hemkunt. But others were very skeptical of his discovery. He approached Bhai Vir Singh, whose book had originally inspired him to seek the seven peaks. They both visited the site and were doubly convinced of their discovery.

Both set out on the difficult task of building a Gurdwara at this location. With an initial amount of 2100 rupees lent by Bhai Vir Singh, Sohan Singh procured construction material and began to build the Gurdwara. Alongside, he continued to popularize his cause and was able to collect more funds. The Gurdwara was finally completed in 1936. As a symbol of respect and reverence towards the local culture, they also enlarged the ancient Hindu temple located on the shore of the Lokpal Lake.

Today, thousands of pilgrims make the long journey every year to reach Hemkunt. It furthers the belief that all faiths that originated in the Indian subcontinent are intricately connected and despite our differences, we are united by shared stories, culture and history.

#Uttarakhand | Snow clearance operation begins on the route of the Hemkund Sahib Shrine in Chamoli district, which would be opened for devotees on May 22.

Hemkund Sahib Gurudwara remains open for only for 4 months June until October for tourists. Therefore, these four months are the best time to visit Hemkund Sahib.