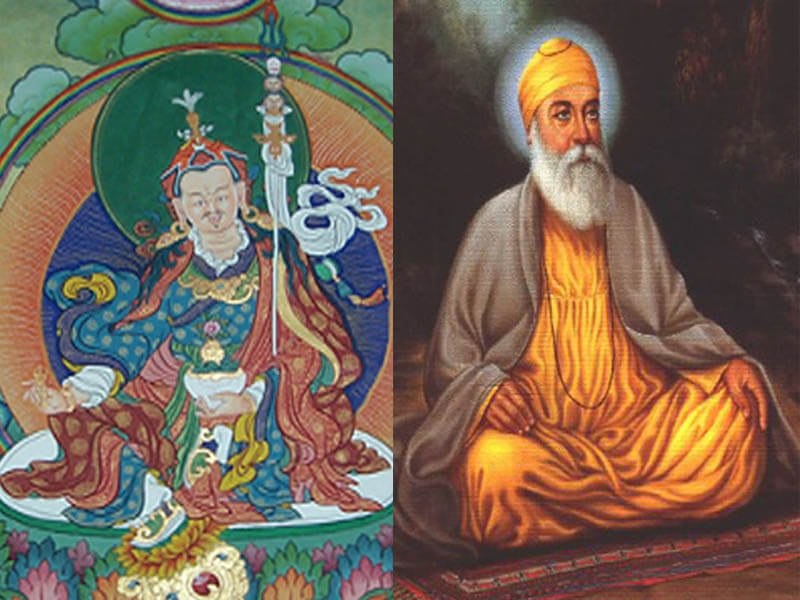 On the face of it, it should be hard to find commonality between Gautama Buddha and Guru Nanak. After all, they walked the earth thousands of years apart, and indeed, born and brought up in very different parts of the subcontinent. Their philosophies and beliefs were shaped by the time they grew up in. Buddha was a prince and Nanak was a son of an ordinary accountant. But if we study their stories carefully, we would begin to see some similarities that one might overlook during a casual glance.

Gautama Budhha, named as Prince Siddhartha by his parents, was born in Lumbini in present day Nepal. He witnessed the suffering in the world and sought to bring an end to the cycle of life and death that all humans have to endure. The aim in Buddhism is Nirvana or Moksha where we end the cycle of suffering. We attain Nirvana once we get rid of the three ‘poisons’ that ail the human mind: greed, ignorance and aversion. Buddha asks us to follow the Eightfold Path.

Some sects of Buddhism promote an ascetic life, bereft of comforts and worldly pleasures, but there are so many different interpretations of Buddha’s teachings. As Buddhism spread across the world, many of the stories, rituals and practices associated with it evolved. But in any case, Buddha was a man of extraordinary intellect and kindness, whose goal was to help people and alleviate their pain.

Guru Nanak was a man of different era. He was born in Nankana Sahib in Punjab region. As he grew up, he noticed inconsistencies in practices he was being asked to follow. He saw the suffering of the world too, and concluded that people have strayed away from the path of God. Like Buddha, Guru Nanak attained Enlightenment. He remained submerged in the river Bein for three days and when he re-emerged, he renounced the old ritualistic ways of the world, much like Buddha did. Like Buddhism, the ultimate aim in Sikhism for a human being is also to end the cycle of life and birth, and attain oneness with the one true God.

But Sikhism stresses that there is no one path to God. For instance, Sikhism does not ask its followers to renounce their life of domesticity and to live as an ascetic. But instead, ‘Mukti’ can be attained in many ways. For instance, Mukti or Liberation can be attained if we perform virtuous deeds and disassociate ourselves from the all five evils.

Guru Nanak As A Sacred Figure In Tibetan Buddhism:

Considering all the differences, it would be perhaps surprising to many that there exists a sect in Tibetan Buddhism that reveres Guru Nanak. Consider this: in the holiest abode of Sikhism, the Golden Temple, you might notice some Tibetan monks who pray down on the steps. They regard Guru Nanak as Guru Rinpoche or Guru Padmasambhava.

The story goes like this: some believe during his worldwide travels (Udasis), Guru Nanak visited Tibet. He went all the way through the Himalayas to Bhutan. Along the way, he traveled past a region where all the lakes were frozen due to harsh winter. The local yak grazers asked him for help. As Guru Nanak struck his staff into the lake, the waters unfroze and has remained so ever since. In the honour of the miracle performed by the Guru, the lake was renamed as Gurudongmar. Over time, Guru was known to locals as Nanak Lama. It is in his memory that monks from this region still travel to Amritsar. Also, a gurdwara is built here near the lake, called Gurdwara Pathar Sahib, that commemorates Guru Nanak.

Once this story spread, people did further research and noticed more similarities in Baba Nanak’s philosophy and philosophy of Buddhism. For instance, both emphasize on the importance of meditation, an individual’s responsibility for their own destiny (concept of Karma) and the importance of congregation (sangam/sangat). Both Buddha and Nanak emphasized that our idea of God should not be limited to deities or shrines. Therefore, in all the differences between Sikhism and Buddhism, one thread is common— a quest to end our woes and attain God.