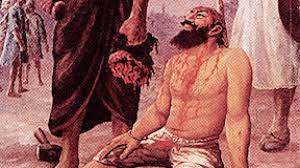 The great author J.R.R. Tolkien once said in one of his works that courage is found in unlikely

places. The stories of bravado and sacrifice often feature heroes that are larger-than-life. They

almost seem inhuman in their strength and composure. But the life story of Bhai Taru Singh

Ji is of a simple hard working man. He was abiding the laws of the time he lived in, and yet for

remaining true to his faith and fellow Sikh brethren, he was captured, tortured and killed by

the Mughals. This year, 16th July is being commemorated as Bhai Taru Singh Ji’s Shaheedi

Bhai Taru Singh was born on 6th October, 1720 to a widowed mother, Bibi Dharam Kaur, who

raised him to follow the path laid by Sikh gurus. His father, Bhai Jodh Singh Ji, was a Sikh

martyr. One day, he witnessed the Sikh fighters saving a girl from the Mughals. Witnessing

their courage, he was inspired to be initiated into the Khalsa Panth. He grew up to be a pious

man— happy and content with his life. He diligently tilled his hand, paid his taxes to the

Mughals, however unfair they may have been, and still, saved enough to help his Sikh

brethren in whichever way he could.

At the time, Sikhs were trying to overthrow the oppressive Mughal governor of Punjab,

The Governor was astonished at the resilience of the Sikh fighters. In an effort to crush the

resistance, he had disbarred Sikhs from all occupations, including businesses and public

employment. He stopped all donations and tithes going to the gurdwaras. But his measures

were consistently falling short and the resistance gained strength. The Mughal authorities

were determined to find the source of their provisions and supplies.

Harbhagat Niranjania of Jindiala (also known as Akil Das) was an informer for the Mughals. He

was a sworn foe of the Sikhs. He spied on Bhai Taru Singh and informed Zakariya about him.

This was when Bhai Taru was arrested along with his sister.

When he was captured and the police party was passing through a village Bhadhana, many

offered to rescue them but Bhai Taru refused. He said he wanted to show the Mughals that

Sikhs are not afraid of death. But upon insistence by many, he allowed them to rescue his

sister. Villagers paid bribes and were able to free her.

When he reached prison, he was tortured in a multitude of ways but the captors could never

After a long ordeal, he was presented before the governor. Defiantly, he greeted him with—

him. He said that he has paid every due and every tax laid on him by the state. The state has

no right to dictate what he chooses to do with the provisions he saves. He refused to apologise

or seek pardon as he steadfastly believed that he committed no wrong. But the oppressors

were far from reasonable. They paid no heed to these arguments.

In those days, two choices were presented to political prisoners— to denounce their own

religion and accept Islam, or die. And Bhai Taru refused to bow to his demands. Being

threatened with death, Bhai Taru Singh said, “I am going to die one day, no matter what my

religion is. So why should I abandon my faith— a faith I am proud to be part of? Why should

I commit such an act as to fall out of favour of my beloved Guru? If God had wanted me to be

a Muslim, I would have been born to Muslim parents. I love my faith more than my life and I

will defend it at all costs.”

Zakariya Khan was told that the resolve of Sikhs stems from their firm faith, and having fulllength hair is a big part of that faith. He called a barber to try and forcefully cut Bhai Taru’s

hair but failed. In the end, he called a cobbler and ordered him to cut Bhai Taru’s scalp. In the

midst of it all, it is said that Bhai Taru could only be heard reciting verses of Japji Sahib. It is

believed that this horrendous act occurred on 9th June, 1745. He was later brought to Lahore

Fort and imprisoned again to a die a slow death in captivity. He left for God’s abode 22 days

art. And they will continue to inspire awe and pride in our future generations.