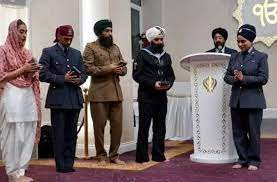 “Nitnem Gutka” is known to be as a Holy Sikh prayer book. Its copies recently have been issued to Sikh military personnel in the UK for the first time in a century. Books were first issued to military personnel more than a century ago, along with other articles of the Sikh faith, including steel daggers, bracelets and wooden combs, but have never been issued again since. This move will directly support Sikh practice, a key component of their faith.

The prayer books were issued by the UK Defence Sikh Network at a ceremony in London. The prayer books have been printed in three languages in durable and waterproof material to withstand the rigours of military life. They were transported to the library of the Central Gurdwara in London, where they were officially issued to military personnel on October 28.

Major Singh Virdee, chairperson of the UK Defence Sikh Network said he uses his Nitnem Gutka three times a day. According to him, for Sikhs, scriptures are not just words, they are the living embodiment of our Guru. He was working on this project since two years & now his efforts come to fruition after long wait.