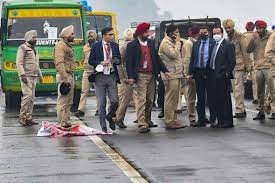 With recent news of death of ganster turned terrorist ‘Rhinda’, although Punjab heave the sigh of relief but even after three decades, the people of Punjab are still feeling insecure. The gangsters who created this atmosphere of fear among the people by brutally murdering international kabaddi player Sandeep Nangal Ambia, singer-turned-politician Sidhu Moosewala & Punjab leader Sudhir Suri created the panic waves. In April this year, Police Chief claimed to have nabbed 515 of the 545 identified gangsters, but the challenge posed by gangsters to the state's law and order situation soon after that, debunked the police's claims. Apart from routine scuffles, which also lead to the murder of rivals out of spite, gangsters extort money from businessmen, bookies and liquor dealers, from people involved in the lucrative business of the Punjabi film & music industry and kidnap-for-ransom.

Apart from Punjab, their network extends to Haryana, Rajasthan, Delhi and Maharashtra. Gangsters manage to run their networks with ease despite being locked up in jails due to political patronage. There is a common discussion of close ties of big politicians with gangsters and drug traffickers. Some politicians mislead the youth for their own interests and make use of gangsters to increase their influence. These gangsters continue to offer their services to politicians in return for protection from legal prosecution. There are many gangsters whose direct or indirect links with politicians have come to light. Many did not hesitate to try their luck considering politics as the “holy Ganges for criminals”. It is also a fact that in most cases the police hesitate to take action against the gangsters because they know that the gangsters have political influence.

Gangsters who disrupt the law and order situation in the country enjoy support from Pak’s notorious intelligence agency, ISI, who seeks all possible means to destabilize India. By using gangsters for its nefarious plans, Pakistan is trying to portray that these operations are being carried out by local criminal groups, who have nothing to do with Pakistan or the ISI. But the reality is that the nexus between gangsters, smugglers, Khalistani and ISI. This is of a great concern to the security agencies. Gangsters fight among themselves to maintain their dominance. People involved in the lucrative business of Punjabi film and music industry are extorted for money by gangsters in return for their own protection. Most of the gangsters are running their networks despite being locked up in jails. Apart from mobile phones, they use social media and the internet. Despite 147 gangsters being caught till April this year, incidents have only increased instead of decreasing. It is estimated that there are around 70 small and big gangster groups in Punjab with which around 700 youths can be associated. More than half of them are in jails. The access of gangsters to sophisticated weapons and explosives has alarmed the border state of Punjab. These weapons indicate the closeness of drug traffickers, Khalistani elements and gangsters with the ISI. Any disturbance in the border state of Punjab can prove to be harmful for entire the country.

In order to face the growing challenge of gangsters, it is necessary to establish trust with the common people and bring the misguided youth back home to reconnect them with the mainstream world. Apart from these steps, it is necessary to strengthen the intelligence gathering system. Criminals coming out on bail or parole should be monitored. Anti-drone technology needs to be further developed to prevent cross-border arms supply and drug trafficking.