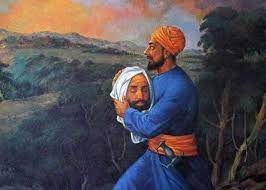 Bhai Jiwan Singh was a Sikh General, a companion and friend of Guru Gobind Singh Ji, the tenth Guru of the Sikhs. The name ‘Bhai Jaita’ was given to him after he had received the rites of initiation by the hands of Guru Gobind Singh on 14 April, 1699 when the Khalsa was inaugurated. Bhai Jaita was born in 1661 at Patna, Bihar (India) to father Sada Nand and mother Mata Premo Ji. He grew up in Patna, got training in various weapons and learned the art of warfare. His military prowess and indomitable nature added his name in golden words in history of Sikh warriors.

He was not only a great fighter, but also an excellent poet. His work "Sri Gur Katha" is a great contribution to the Sikh religion. This book contains a firsthand account of Guru’s battles. He eventually became a Sikh martyr and an icon during the war at Chamkaur in 1704 against the Muhammadan armies.

He became famous when he cut the head of his own father on his wish and placed it on the body of the ninth Guru of the Sikhs, Guru Teg Bahadur in order to rescue his severed head after being executed at Delhi under the orders of Aurangzeb. He in turn received the honour of the title “Rangrette Guru ke Bette” from his community from Guru Gobind Singh.

Gurudwara Shaheed Burj Sahib is the place where Baba Jiwan Singh was martyred. This Gurudwara Sahib was situated in the memory of Baba Jiwan Singh Ji. There is a historical well there, where Guru Ji, two Sahibzadas and other Sikh soldiers drank water.