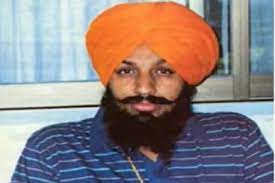 Balwinder Singh Jatana, was hailed as a ‘Sikh Liberation Hero’ by few Sikh people. He had shot dead two officers in Chandigarh along with his associates, due to which the construction work of the Sutlej-Yamuna link canal project was stopped in Punjab at the time.

Jatana was a resident of Ropar, Punjab. He was associated with Babbar Khalsa. He was one of the close associates of Babbar Khalsa chief Sukhdev Singh Babbar. That’s why he was made lieutenant general of Malwa area of Punjab. In that area, the activities of Babbar Khalsa used to be conducted on the behest of Jatana.

The long dispute between state of Punjab and Haryana has been going on for years regarding the water of Sutlej-Yamuna. Punjab argues that the flow of water of Ravi and Beas rivers has reduced, so it needs more water. At the same time, there is a demand of Haryana that the work of Sutlej-Yamuna canal should be completed so that it can get water equivalent to an area of about 3.5 million acre feet. Regarding the same issue, meeting was going on in Chandigarh,Capital of Punjab & Haryana, to build the Sutlej-Yamuna link canal, on 23 July 1990. Babbar Khalsa strongly opposed this move of sharing water of Punjab’s part with Haryana. The meeting was going on when Balwinder Singh Jatana along with his associates Jagtar Singh Pinjola, Harmeet Singh Bhaowal and Balbir Singh Fauji came there. During the debate, SYL’s Chief Engineer and Superintending Engineer MS Sikri and Avtar Aulakh were shot dead by Jatana& his allies & after that they ran from the scene. State police started a lookout for Jatana and other individuals involved in the killing. The police searched for Jatana at his residence, where he wasn’t found, but his family was reportedly detained. Jatana’s other accomplice Nirpreet Kaur had claimed that the cops along with the help of a Poohla Nihang had burnt alive 4 members of Jatan’s family. The persons who died involved Jatana’s grandmother Dwarki Kaur, aunt Jamsher Kaur, sister Manpreet Kaur and nephew Simranjit Singh. Nirpreet Kaur further confirmed that Jatana had killed the engineers.

It was a few days later, on, that an informer alerted the police of Jatana’s whereabouts – hoping to collect the Rs. 16 lakh reward , which was on his head. It was the afternoon of September 4, 1991when Balwinder Singh and Charanjeet Singh Channa were driving towards Sadhugarh village when they saw a police checkpoint. They abruptly turned their jeep around and ran into nearby fields for an encounter with the police. Both Singh’s had very little ammunition and were soon encountered by the police.

Well, many people in Punjab considered Jatana’s move was necessary. He was observed as one of the Sikh liberation movement’s heroes, who fought to put a stop to the looting and subjugation of Punjab. They also believed that he sacrificed his life & thus considered as ‘Shahed’ by them. The Shiromani Gurdwara Parbandhak Committee (SGPC) on 15th Oct, 2022 displayed a portrait of Sikh militant Balwinder Singh Jatana at Central Sikh Museum in the Golden Temple complex in Amritsar. SGPC Chief Harjinder Singh said the museum is an important source of Sikh history and the portraits of those who made sacrifice for the community are displayed here.About Jatana, he said, "The protector of the waters fiercely opposed the SYL canal without caring for his life."